For some time now, I have shared Emilio Gilolmo’s opinion that an artist’s merit lies not in providing answers but simply in asking interesting questions. And that merit is indisputably present in Pilar Millán’s show at the Villanueva Pavilion in Madrid’s Royal Botanic Garden.

One of the great questions underlying the works that comprise this exhibition has to do with whether the way historical facts have been and are still being read today under the auspices of power is the only interpretation, or if there are others, perhaps closer to the truth but silenced by that power.

The second invitation is to ask ourselves why we didn’t react sooner to the historical misuse of our planet’s historical resources, and why we are allowing the consequent deterioration and suffering to continue.

Pilar Millán’s works use different artistic languages to highlight the event that triggered the aforementioned questions. José Celestino Mutis was one of the most important botanists in history and did a staggering amount of work in Santa Fe de Bogotá, where he had a long personal encounter with the German scholar Alexander von Humboldt in 1801, the age of great scientific expeditions.

Using the botanical drawings made at the school Mutis founded as her basis, Pilar presents an impressive series of works in black ink on paper and an installation made of hydraulic cement tiles which allude to the possibility of different interpretations of history that the artist suggests.

The official version, endorsed by the powers-that-be, conceals, covers up or dyes—in an opaque black that takes different material forms—the other version struggling to come to light: Leyenda Negra[Black Legend].

A superb installation with a neon piece, sculptures/objects and photographs make up Leyenda Dorada[Golden Legend], which speaks to us of how the actions of various colonising agents were gilded or sugar-coated: a reality invented and idealised by those in power to offset the negative image that was gradually forming in the collective consciousness.

Campo de Minas[Minefield] brings together a set of ink drawings on dyed paper, an audiovisual piece and a series of photographs that recall the historical ambition of humanity, and especially of the ruling classes, to seize material resources, in this case immensely valuable minerals obtained by mining, heedless of the potentially harmful effects on the people who inhabited those lands and their small farms. The same dynamic is still at work today.

The Latin phrase “in medio virtus est” suddenly comes to mind as a succinct yet apt way of summarising Pilar’s remarkable ability to strike a balance, to level those two forces which seem locked in an eternal struggle to outdo each other in the work of art. Concept and craft. Dermis and epidermis. 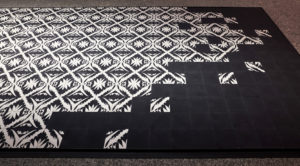 There are encounters that, despite passing unnoticed, have altered the history of individuals, history in general or the history of science. Within this field, this exhibition aspires to revive the memory of an encounter between Alexander von Humboldt and José Celestino Mutis in the historic age of scientific expeditions through pieces that attempt to infiltrate the margins of science.

I ask myself why some encounters go unnoticed, who tries to hide them under black ink and writes history, what we have learned.The encounter between Mutis and Humboldt was a conversation that lasted for months, during which they exchanged knowledge as equals. Their interactions were symmetrical encounters, practically non-existent outside elite intellectual circles at the time, and all too rare in the contemporary world.

The Villanueva Pavilion at the Royal Botanic Gardens creates the space necessary for these reflections to emerge, on the playing field of encratic language (that produced in spheres of power, according to R. Barthes), by placing an installation of tiles on the floor that cannot be stepped on. This untreadable—uninhabitable—condition is designed to keep spectators at a distance, creating a dense space of dialogue and thought underscored by the materiality of hydraulic cement*. The tiles’ symmetrical pattern, which ultimately fades to black, is based on the forms of botanical studies in the Mutis Collection**. This symmetrical design first appeared in the ink on paper series Leyenda Negra[Black Legend, 2021].

These pieces are not merely a product of formal or aesthetic interest in those lovely drawings in the Mutis Collection; in them, I deliberately used something familiar to audiences as a way of introducing them, via the chinks and cracks I am gradually discovering, to scientific language. My goal is to stimulate visitors, not only as critical subjects but also as a collective body that refuses to obey those unbending rules (walls) we have all inherited from human history.

In addition to botany, scientific expeditions like those of Humboldt and Mutis explored another field of both scientific and economic interest: mineralogy. Celestino Mutis was granted the operating rights of the first gold mine in what is now Colombia. Interested in this intersection between science and economics as a place of intervention in culture, I would like to add a second layer of meaning in this exhibition by using gold as a symbol.

In contrast to Spain’s Black Legend, the Golden Legend or Legenda Aurea Sanctorum extolled the lives of saints and martyrs as evangelising examples in the colonies. In order to connect with the symbols used in indigenous ceremonies, such as fire, coal or gold, the sermons of the day often resorted to the language of alchemy to describe the process of salvation. Whereas on the material plane alchemists used fire to transmute metals into gold, on the philosophical plane gold was, and still is, a symbol of enlightenment.

As matter, gold and coal are represented in two phases of the process of building an altar as a universal salvation rite, Ofrenda en negro[Offering in Black, 2021].

Aurum nostrum non est aurum vulgi* (our gold is not common gold) was the motto used by thinkers and mystics for centuries. For this exhibition, I have turned the motto into a piece of red neon in transparent glass, formal accomplice of the alembics used in alchemy, knowing it to be one of the main forerunners of the modern sciences that underpin today’s metal industry.

Then, as now, the legal or illegal extraction of minerals drove a global economy where indigenous communities were silenced in negotiations with the land. I want to give them a place in this show by retrieving their contemporary testimony in a documentary video, which is underscored by a series of drawings titled Campo de Minas[Minefield]. A soundtrack envelops us in the voice of a female weaver speaking Quechua as a song of resistance, as an absence in the Cartesian representation of science, as an incomplete translation. And a composition of photographs taken in 2019 closes and opens the exhibition to other encounters. In symmetry.

* motto revived by Carl G. Jung, acknowledging those alchemists who only longed for spiritual or philosophical gold, as opposed to those who desired material, metallic gold.